Imagine a brilliant rock show combined with amazing, bizarre daredevil circus acts, a stellar light show and all performed with a forked tongue firmly in each cheek.

There’s simply no better way to celebrate Halloween than to see the Circus of Horrors at Blackpool Pleasure Beach!

Annually the Circus of Horrors plays over 100 UK theatres and this tour has expanded to take in festivals throughout the world including The Fuji Rock Festival in Japan (twice), the Wacken Festival in Germany plus shows in Chile, Uruguay, Holland, Belgium, Argentina, France, Italy, Ireland, Finland, Hong Kong and Moscow where it became the 1st UK Circus ever to perform in Russia. The show also played an astounding 10 nights at London’s O2.

This is not the first time that The Circus of Horrors has created history, as it became the only circus ever to reach the finals of Britain’s Got Talent and the first circus to perform in London’s West End for over 100 years.

Warning: The Circus of Horrors contains some explicit nudity and language of an adult nature, it is not suitable for children. Recommended age 16+.

There is now an Addams ‘Family Friendly’ Matinee performance at 4 pm each day which is suitable for children.

Click the image below to see more details on this show! 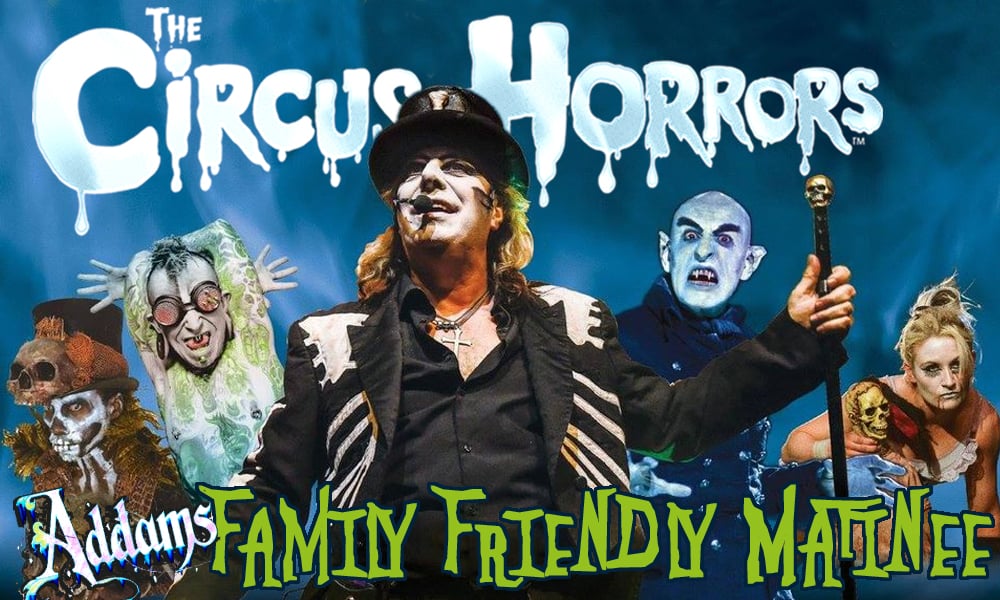 Calls will cost 13 pence per minute plus your telephone company’s access charge. Lines are open Monday – Friday from 9 am – 5.30 pm.

If Quentin Tarantino directed Cirque Du Soleil then you would be halfway there!